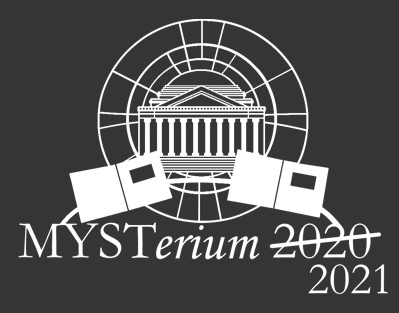 Like last year, the XXII Mysterium was held entirely online, on July 16–18, with the panels and presentations streamed to both Twitch and YouTube.

Saturday started at 18:00 KIT with Rand Miller playing through Myst and giving some insights in the design process. One highlight was the medallion on the planetarium door.

Saturday started at 8:30 KIT with a message from the Committee, giving some info on the organisation of this year’s convention.

The first panel was at 9:00, with some members of the Myst IV: Revelation team: Meinert Hansen (Art Director/Sr. Concept Artist), Brian Wrench (Actor – Sirrus) and Geneviève Lord (Producer), discussing how Myst IV evolved in its looks, styles and immersive design.

At 11:00 it was time for the Myst State of the Union panel, with Eric A. Anderson (Creative Director) and Hannah Gamiel (Development Director) presenting Cyan’s newly re-imagined version of Myst before its release for PC/VR and Mac.

At 12:30 the Cyan Dev Team Q&A panel, with Abner Coimbre, Brandon Collins, Hannah Gamiel, Karl Johnson and Josh Van Veldhuizen discussing what it means to be a developer at Cyan and how they adapted to working from home.

At 13:30 the Cyan Art Team Q&A panel, with Eric Anderson, Blake Bjerke, Jeremiah Castro, Autumn Palfenier and Derrick Robinson talking about how the look of a game is established and what inspiration they draw from in designing worlds.

At 15:00 Vincent Weaver presented his Apple II Myst Demake, talking about the challenges involved with getting a fully playable version of Myst working on an 8-bit system from the 1970s, fitting on a reasonable number of floppy disks. To learn more (or try it yourself!), see Vince’s website.

At 16:00 Chuck Carter (original Myst Artist) presented his reworking of the Selenitic Age for Unreal Engine 5, which will add some new twists (e.g. the maze ship is now destroyed). The redesign will have original music by Conductor/Composer Lucas Richman. You can follow Chuck on his website, Twitter and Instagram.

At 17:00 it was time for the discussion rooms, with two focused chats beside open discussions: “Unwritten Character Workshop”, about creating a character for the Myst RPG, and “Dancing with Annacat”, to get some exercise after sitting and watching streams all day.

Sunday started at 8:30 KIT with a message from the Committee, giving some info and announcing the location of Mysterium 2022, one that will give attendees the true Myst experience 😉

The first panel was at 9:00, with Maxx Hirsch’s honors thesis “Finding Tomahna”, analyzing Myst as a product of American 1990s cultural movements and ideas, considering attitudes towards war, violence, new technology, reading, community, and diversity. You can read the full text here.

At 1o:00 documentary filmmaker Phillip Shane gave an update and a sneak peek of the Myst Documentary, along with his collaborators Elana Bogdan, Will Cavendish, Rachel Kittner, Anais Michel, Katie Postma, Joshua Reinstein and Randy Woods. You can follow and support the development of the documentary on the official website.

At 11:30 the Uru Worldbuilders Panel, with Eric Anderson, Mike Hines, Doug McBride, Steve Ogden and Bill Slease discussed about the original development of Uru, from DIRT and Mudpie up to the GameTap era.

At 14:00 the Unwritten Update panel with Veronica Hamilton gave some updates on the RPG and its role in Cyan Ventures, discussing the design and how it focuses on non-violent solutions. To learn more, visit the official website.

At 15:00 it was time for Cyan Games Completed Rapidly, a round of speedrunning, with some unusual categories like Myst on the Apple II, and a few races.

At 17:30 it was time for the discussion rooms, with no preset topics, and the Speedrun After Party, in which the speedrunners chatted with the attendees about the runs and racesfrom the panel.

Thanks and kudos to the Mysterium Committee, who did a great job at organising and managing the event.