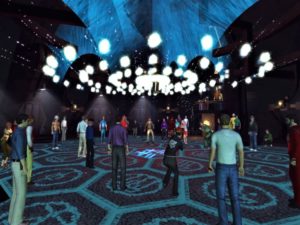 The anniversary celebrations have been a success, with spikes of over 70 attendants. If you could not attend, or if you wish to relive the experience, be sure to watch the videos from Minasunda’s Youtube channel.

In the opening ceremony, Ghaelen D’Lareh retold the last minutes of the closure of Prologue, back on February 9, 2004, and the first days of MOULa’s reopening on February 8, 2010.

Each team suffered from setbacks: team A suffered from a lag spike at the very last symbol; team B suffered interference from a mean person/people; team C had little practice, the most substitutes, and a position swap.

On Saturday, for the Cavern Tour, for the first time Larry LeDeay streamed the event through his Twitch channel. Despite technical difficulties for a few attendees, the new format was on the whole a success. The stream is not meant to replace actually being there, but will allow showing extra materials that would otherwise not be possible.

The NULP Dance Show (featuring Aeonihya, Calisia, Claidi Song, Lu*, Mabe, Roland, Eternal Seeker, Willy, tsuno) was, as always, excellent and perfectly color-coordinated. The music was provided by Piboc, who was present at the show.

For the Story Night Special, in the Baron’s office, r’Tayrtahn recounted Douglas Sharper’s experience with the restoration, and the rising tension that led to the bahro incident.

On Sunday, in the Fashion Show competition, five contestants won the votes of the public: Ondine was 1st, with 32 %; Kamikatze, Claidi Song and Mabe were 2nd ex aequo, with 16 %; Aristocat was 3rd, with 8 %.

For the Explorer Memorial, Ghaelen read the names of the explorers we lost along the way; 2019 was a particularly hard year, with the loss of Tai’lahr. Korov’ev took the occasion to remind everyone that he took charge of keeping the OpenUru page updated, so if you know of names that are missing, please contact him.

Closing the weekend, of course, Yoda performed a Magic Show on the cliff in Kadish Tolesa, followed by a dance party in the Pyramid.

A big thank you to the organisers: Minasunda, Eternal Seeker, PodHopper, Larry, Fil, Donahoo, the participants at the contests, and to all the explorers, in the Cavern or on the Surface, who keep making Uru the unique place it is.

History of the Guild