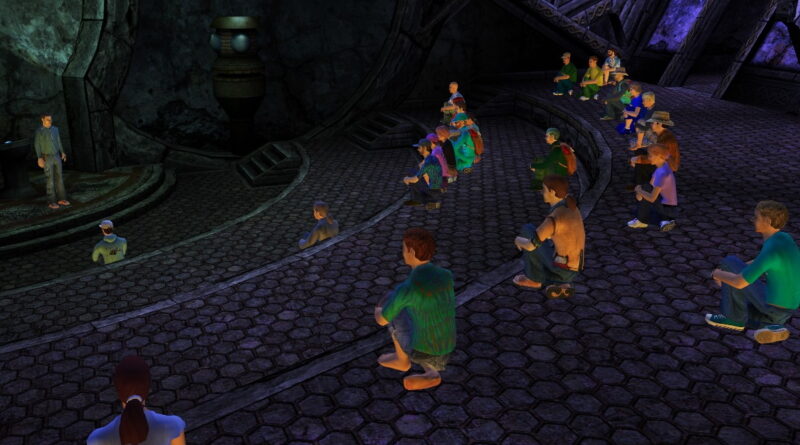 Here is the summary for the 152nd All Guilds Meeting, along with the raw and cleansed chatlogs!

For the third time, after 2019 and 2021, Cyan is taking part in Lexember, posting a word definition every day on their official Twitter account. This time, along with D’ni, they will be posting definitions for Rivenese words!

As with past years, a list with all the relevant links is being compiled on the Guild of Archivist’s wiki.

The team of artists, programmers, and janitors were quite weary after the summer update, so they took things easy this time and combined the time of the third and fourth quarters. There are new Ages, improvements to existing ones, and fixes.

There have been talks about porting over the Open Cave pet Relto page, but there are a few issues to be cleared before that can be done, if at all.

Doobes has fixed an issue with the Ahnonay Cathedral doors, which will stay open until the last person links out. He is also trying to fix a similar issue with the doors in Chiso Preniv, which depend on a couple of scripts that affect many other doors, so there may be a potential benefit to these cases (possibly even re-enabling the doors in the Museum and the Library).

The update is presently on the Staging Server, undergoing final testing, and is expected to be released sometime in the next two weeks.

Other items on Doobes’ to-do list are getting Relto and Kirel almost fully converted to Korman, so that adding books and pages and updating things would be much easier. The full Descent is still being worked on. He is also playing around with the five Guild Pubs, trying to make them a bit more unique, by e.g. opening up the side rooms and showing various work going on with each. Direbo is on hold, pending Cyan’s decision on Myst V content.

Doobes is also planning to hold a live demonstration at Mysterium 2023 of how to build and export an Age with Korman, and how to import Ages using Sirius’ ZLZ Age Importer. Along with that, he is working on an asset library of various D’ni objects to use and essentially ‘paste in’ an Age; this to encourage others to take a crack at Age building by easing some of the modeling and texturing burden a bit.

☛ Minasunda announced the upcoming release of the machinima movie Okohahzah (“black-white” in D’ni, in the sense of light and shadow) on YouTube, Saturday 10 at 12:00 KIT. You will be able to chat with the creators (including Mina) on the YouTube Premiere chat or in the Cavern, in Mir-O-Bot’s Elonin (o get there PM “link” or “meet” to the bot – note that the command is not “to Elonin”).

On 30 December Minasunda will also release a video with a review of 2022 and all that happened in the Cavern this year. She will post the link on Facebook and Discord.

☛ The 13th anniversary of MOULa is coming soon. Minasunda is planning the festival week on 6–11 February: if you’d like want to contribute with an event, let her know so that she can plan the dates.

Podhopper already announced the Eddie Competition, while Nosila and Dahmpa will host a music event together; Eternal Seeker and Mina are planning another music event with a ‘guided dance’, and the Nulp Dance Group is working on a dance show in Fahets Highgarden.

☛ Minasunda closed with a plea to be considerate when helping new players. There have been reports of ‘veteran’ explorers who have solved puzzles in newcomers’ instances despite their protest. This is inappropriate behavior that takes the fun out of playing; the respectful act is to back off when new players decline the help.

R’Tayrtahn records videos of the sessions, that he eventually uploads to his YouTube channel. Be careful if you PM r’Tay during the events, as messages will be visible in the videos 😉

The Storytellers have been running sporadic story events, and a few scheduled events, such as the Town Halls on the last Wednesday of the month. Due to holidays, the December one may be skipped.

In place of that, in Eder Naybree on Sunday 4 at 11:00 KIT, they closed the ‘troublemakers’ story arc, to move on to others such as the Rei’schu negotiations or Benahvud’s amnesia. Transcripts were posted on the story forums, along with the discussion threads.

The Mysterium prompt for December is “Endings”; the deadline is December 31. Winners of the “Fall” prompt for November were Delcolux, Redwoodrroad, Calum Traveler, Talashar and Laughingpineapple.

In December, the Fan Ages Expeditions will continue the exploration of the underworld of Elodea (Unterwelt, Tunnelgang, Schatzkammern) by Dulcamara.