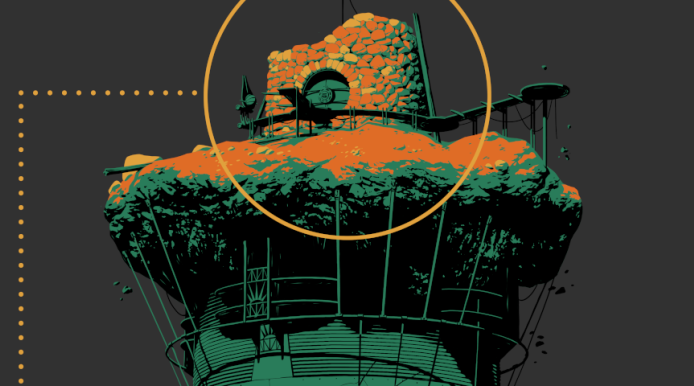 The XXIII Mysterium was held in Denver, CO on August 12–14, with the panels and presentations streamed to both Twitch and YouTube.

Minasunda and Civer Gaming made summary videos; Belford wrote a two-part summary ([1], [2]) in his blog, commenting on Cyan’s announcements.

Friday started at 10:00 KIT with the Opening Announcements and Cyan’s “State of the Union”, with Eric A. Anderson (Creative Director) and Hannah Gamiel (Development Director). They are super busy developing Firmament (they also showed a preview video), so they will combine Myst’s and Riven’s anniversaries next year. They will share something new every month, including challenge coins, Cyan logo shirts, re-releasing the ebook versions of the Myst novels, and digging through Riven’s archives. They are working with members of the community on “special, secret projects”. There are no plans for an official remake of Uru.

At 14:00 the The Last Clockwinder panel with John Austin and Anita Tung of Pontoco studio talked about their game, developed with Cyan Ventures (which has shifted role from publishing arm to development-support group).

At 15:00 Kefrith’s Cryptic Contraption presentation revealed his surprise Myst-inspired creation, discussing the setbacks he got into in the creative process.

At 16:00 the full recording of the concert held by the NULP Dance Group in Elonin was released as a YouTube Premiere.

At 18:00 it was time for the trip to the Meow Wolf: Convergence Station interactive art series.

Saturday started at 10:00 KIT with the Cyan Q&A, with Eric Anderson, Rand Miller, Ryan “greydragon” Warzecha discussing what is happening at Cyan, their artistic and technical approach to game design, and the rationale behind some decisions on Myst and Uru lore.

At 11:15 the MOULa Fan Creations: Tech Development panel with Colin “Maccodemonkey” Cornaby, Adam “Hoikas” Johnson, Darryl “Paradox” Pogue, Paul “rarified” Richards presented the latest development news about MOULa, with an update on the process to make the client cross-platform. To get involved, you can contact the OpenUru team (testing) on Discord, or the H’uru team (developing) on GitHub and IRC.

At 11:45 the MOULa Fan Creations: Ages panel with Ametist, Patrick “Doobes” Dulebohn, Harley “Calum Traveler”, Keith “Tweek” Lord discussed the challenges of creating and modifying environments for MOULa. The current tool for creating ages is Korman for Blender. You can find tutorials in the GoW wiki; Calum Traveler also made a series of videos.

At 14:45 the highlights of the concert held by the NULP Dance Group in Elonin was released as a YouTube Premiere.

At 16:00 Erik Oberg’s Libraries of Myst presentation analyzed how libraries fit into Myst, both in the explicit sense of literal, in-game libraries and the broader presence of librarian principles and practices in the Myst universe, as well as how Myst fits into real-world libraries.

At 19:45 the Achenar: Redemption in One Part panel with Guy Sprung, who played Achenar in Myst IV: Revelation, discussed the process behind playing a character who experiences both sides of being the villain and the savior.

At 20:45 it was time for Cavern Feud, hosted by Dan Binder, in which teams competed against each other to see who best knows how the Myst community responds to various survey questions, like “what would Yeesha name her cat?” or  “which Myst animal would make the best pet?”

Sunday started at 10:00 KIT with the Myst Documentary Sneak Peek and Q&A, with Elana Bogdan, Katie “Kha’tie” Postma, Joshua Reinstein, Philip Shane, giving insights into the creation of The Myst Documentary, which will cover Myst, Riven and Uru, the near-collapse of Cyan in 2005 and its climb back in the following years, and the new era that started with Obduction. Attendees had an exclusive sneak peak of the documentary, then they showcased the new online Community Vault of Myst Stories.

At 12:00 the Closing Ceremonies were held, wrapping up this year’s convention, running the prize drawing, and announcing next year’s location: Spokane!

Thanks and kudos to the Mysterium Committee, who did a great job at organising and managing the event.