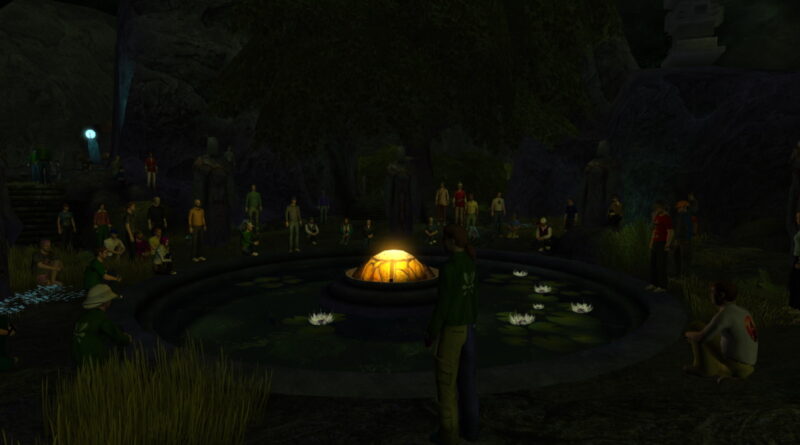 Here is the summary for the 150th All Guilds Meeting, along with the raw and cleansed chatlogs! This was also the first meeting not held in Kirel, but in Fahets Highgarden.

Skyisblu presented her cooking sessions, held each month in the Guild of Caterers’ Hood and streamed on her Twitch channel in both English and French; a chance to get together, learn a new recipe and talk food. Recordings of the streams and the accompanying recipes are available on her weblog.

IwonK will draw and talk on her Twitch channel on Friday 14 at 15:00 KIT. In Cavern, the gathering will be in the Guild of Cookies’ Hood, around the Ahyoheek table.

Superabbit announced the creation of the Musicians Guild’s Hood, to promote connection between musicians in the Cavern and to promote fan-created music for fan-created Ages. Links to streams and bandcamp pages will be welcome on the left imager.

A Cavern Tour will be held on Saturday 29 at 11:00 KIT, starting in the Cavern Tour’s Hood.

Events that were streamed via Twitch have been uploaded to YouTube. For a summary of the panels, check our dedicated post.

Participants were invited to give feedback via a survey. The results say that the Meow Wolf event was appreciated, so they will look into similar locations in the future. Cavern Feud was also very well received, so if they can get more questions they might do it again next year. Finally, a number of people have asked for ASL translation, or captions; an ASL translator may be beyond the budget, but they will look into captioning.

Mysterium 2023 will be held in Spokane, WA; a precise date was not been decided yet, but could be in late June or early July. The Committee will be formed by Elliot “Taniith” Borenstein and Kelly “Rayne” Coston. Vaccination policy will likely be the same as this year, following CDC guidelines.

The Mysterium prompt for October is “Spooky”; the deadline is October 31. Winners of the “Sleep, Rest” prompt for September were Redwoodrroad, Calum Traveler, Talashar and Laughingpineapple.

The ‘Storytellers’ group held their monthly Town Hall event for players who are interested in keeping tabs on the ongoing IC story.

Calum Traveler has started to organise the “negotiations with the people of Rei’schu” via Discord, to manage scheduling conflicts between their ‘ambassadors’. The server is set up so that only ‘diplomats’ can post in the active story channels, but there are a few side channels for other people to talk and discuss.

These logs will be transcribed into a series of journals that will be brought into MOULa.

The garden Age of Eder Naybree, the ‘Prologue’ to the ‘Rei’schu arc’, was released in early September.

Shortly before the All Guilds Meeting another garden Age was released: Fahets Highgarden, by Tweek, who answered a few questions. The statues in the location were a gift from a D’ni artisan called Tommen, who was found stranded upon an Age many years ago after he fled the Fall. The statues were a thank-you gift for freeing him.

Fahets’ prime Marker, unlike most available Ages, is active but will have to be recalibrated, so coordinates will for now be unreliable.

The next Age to be released will be another garden Age, Eder Bahvahnter. As now the circle of bookstands in Chiso Preniv is full, older books will be moved to the shelves while new ones will be featured promenently on the stands.

Due to travel and work obligations, the Dev Team will combine the Q3 and Q4 updates into a single one for the end of 2022, sometime in early December, with some updates being pushed into 2023.

The Minkata Delta shard, announced at Mysterium, may still launch sometime this year, but no progress yet has been made on setting it up. There have been fires in the US, some close to Rarified’s location, so he may be unable to monitor the server for some time; background measures have been taken to ensure that the Minkata server can remain running in case of emergency.

A pre-built virtual machine snapshot of the Minkata server, that anyone could set up and easily run, has been set up on Docker; we will provide more info on that in a followup post.

Darryl Pogue announced the H’uru team’s involvement in the annual Hacktoberfest event, a month-long event that encourages people to contribute to open-source software projects; with four contributions participants can earn a free T-shirt (a real-world physical shirt … but a virtual shirt in Uru could be an idea for a contribution!).

Last year, the H’uru repositories on GitHub saw 41 contributions to Uru-related projects, including the game client and content itself, but also the Korman Blender plugin for Age building, the DirtSand server, and other tools.

If you are not a coder, you can still contribute in the form of bug reports and feature requests, or things to improve the usability and quality of life when playing Uru.

You can find help and support, including suggestions for first-time contributors, in the #code-dev channel on the OpenUru Discord.

Diranda announced that the Guild of Authors and Artists is hosting the National Novel Writing Month in the Cavern this year. The first NaNoWriMo-related meeting will be held on October 7 at 13:00 KIT in the Ae’gura Messengers Pub, so if you are interested, feel free to visit.

R’Tayrtahn gave two updates, one for the D’ni Language Classes and one for the Story Nights. Currently, there are two students taking the classes at various stages of completion.

R’Tayrtahn is in the process of uploading the backlog of videos from previous sessions to his YouTube channel. Be careful if you PM r’Tay during the events, as messages will be visible in the videos 😉

The next All Guilds Meeting is planned for Saturday, November 5 (Leevofo 13) at 13:00 KIT.