The first week of August will be full of activity in the cavern. During the Moula Summer Festival, a variety of events are scheduled: contests, music events, a video event and a marker game. It is also the first year we can offer a Gahreesen Wall game as a contest. Cone Race is another new contest and last but not least, a Door Run contest.

A recording of the Nulp Dance Group Concert will also be released as a YouTube Premiere on August 12 at 16:00 KIT, and a second video with excerpts from it will be released on August 13 at 14:45 KIT. 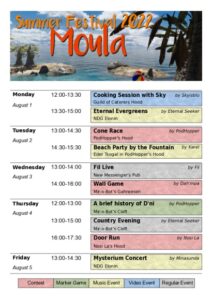 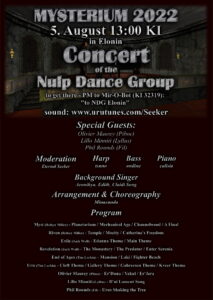 A pdf version of the Summer Festival flyer is available, containing the schedule and detailed information about all the events (which are also listed in the calendar).

For more information about the festival, feel free to contact PodHopper at: